Ten newly released songs by songwriter Wayne Hamilton and friends! The collection was a long time in gestation, mostly because of the pandemic. It consists of solo writes and co-writes, and it expanded our view of incorporating 21st-century technologies into the recording process. 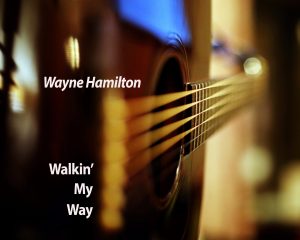 Walkin’ My Way, the opening song and title cut, is a tune that fellow MAS (Minnesota Association of Songwriters) member Mike Rudquist and I put together in 2009. To me, Mike’s original arrangement simply screamed out for horns, so the song waited patiently until I could figure out how to make that happen cost-effectively. When Doug Millaway brought his engineering wizardry to the project, the horns, along with all the other instruments, suddenly appeared.  Except where noted otherwise, Doug played every instrument on every cut in this collection.

In late Spring/early Summer of 2019, founding MAS member John Bennett called me, looking for lyrics to three songs. Two of them made their way into this collection. The first, Get Busy, is a call to our country’s citizens to “get involved” and personally make a statement about, if not personally help correct, environmental problems in America. The musical arrangement is by Doug Millaway.

One of my all-time-favorite people to co-write with is Nashville veteran Marc-Alan Barnette. While looking for material for this collection, I uncovered a couple of tunes he and I wrote together. The first to appear here is the Doug Millaway arrangement of Whole Lot To Learn, a gender-neutral song about how to righteously end a relationship on the rocks.

Another favorite co-writer is my “brother from another mother”, Doug Millaway,  who played and arranged the instruments you hear on Perfect Crime. We met via an MAS co-writing exercise in late 2013, and have been steadily working together since. We formed an award-winning performance duo called TWO TONE (twotoneduo.com), released an EP and a CD under that name and regularly perform live at venues all over Minnesota. See notes elsewhere on this page for additonal invaluable contributions from my friend Doug.

Those Who Do (For Those Who Can’t) is the second Marc-Alan Barnette co-write in the collection, a tribute to critical-services workers all over America who faithfully help disabled and severely ill patients. It was written in 2006 with appreciation for critical care workers, long before the recent pandemic. The bass line of this song was provided by fellow MAS member Jim Melby. The remaining elements of the musical arrangement were created by Doug Millaway.

No Way To Plan is the second John Bennett co-write on the album. Another gender-neutral song, it fosters an even-keeled and positive approach to life’s uncertainty. Musical arrangement by Doug Millaway.

Night Rolls In results from my admiration of superstar Jackson Browne. As a lifelong fan of JB, I can only hope that this tune might somehow remind listeners of him. Thanks to Doug Millaway for the musical arrangement.

Another solo write, Why Do People Like The Blues? is an overblown, satirical and humorous look at one of my favorite musical forms. Despite the song’s humor, I deeply respect the genre. No other type of American musical expression has anywhere near the soul that exists in the Blues. While this was a solo write, I owe a great debt to Blues master Paul Nye, a fellow MAS member, for the spot-on musical arrangement of this cut. Thanks, Paul!

Old Nellie tells the true story of my “first car”. I was 15 years old at the time and the car was 25. I’d give almost anything to have her back again; she had the best features of her day. At the top of the Plymouth line, her model number was simply “P4” – their “Luxury Sedan”! Even though she didn’t have air bags or even seat belts, she offered safety to a newbie driver like me in the form of the materials from which she was constructed. Listen to the song and then Google her. Maybe you’ll get a sense of why, at least in automotive terms, Nellie was my “first love.” Thanks again to Jim Melby for the bass line and Doug Millaway for the musical arrangement. 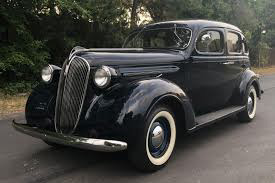 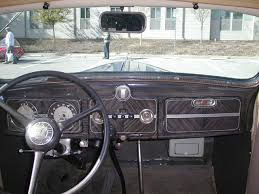 As anyone who has known me for more than an hour can confirm, I’m a bit geeky about history. I love to collect historical stories and write songs about them. Having been born in Washington, DC and spending roughly half my life in Virginia and Maryland, I still have stories to tell. The final song in this collection, The Way That Ferdie Sang, is one of them. It’s about a song-and-dance team called The Durang Brothers, Ferdinand and Charles, who were the first professional performers to perform America’s National Anthem to a live audience, shortly after the battle of Baltimore in 1814 (September 12-14). Few know that the song they sang didn’t officially become the National Anthem until 1931 (by an act of Congress), and neither Francis Scott Key’s poem nor the song it became was titled “The Star Spangled Banner” in 1814. But the evolution of the poem to music is another story altogether – the melody was originally developed in or about 1773 as the theme for a British “drinking club”. By 1814, the melody had been used in many other story songs in England, Canada and America. My thanks to Mike Rudquist, who co-wrote this song with me, and to Doug Millaway, who brought to life the details of the song as I envisioned them. I am extremely grateful to both of them and to you for giving us a listen! 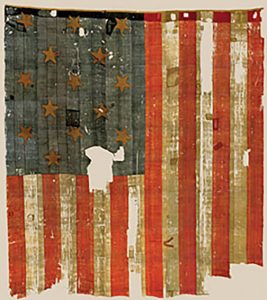 A picture of the huge (40′ x 32′) Garrison flag that flew over Fort McHenry after the battle of Baltimore. The damage is not from the battle, but rather from the “souvenir hunters” who cut pieces from the flag in the decades afterward. Note the 15 stripes on this 1814 flag, instead of today’s 13 stripes. This is the way the flag was hung in the Smithsonian when I was growing up near there.

Charles Durang in his later years. No picture exists of his brother Ferdinand, but while Charles and their father John became famous in their own right, details about Ferdinand have disappeared from the annals of American history.