Doug Millaway and Wayne Hamilton met for the first time in 2013 when they were selected to “partner up” for a one-song co-writing exercise at the Minnesota Association of Songwriters. They had so much fun they wrote two songs for the exercise and haven’t quit since. It wasn’t long before they started booking gigs together under the band name of TWO TONE. Their collective, vintage style comes from having “been around the barn” for awhile; Doug is fascinated with all things instrumental (especially stringed instruments), and Wayne loves exploring the small idiosyncrasies of the songwriting craft and applying them to his vocal stylings as often as possible. Together, they’ve given us five songs to enjoy (so far). Whether or not your feet are tapping along, you’ll have something to think about as you listen. 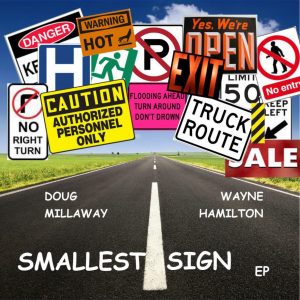 Smallest Sign
Like all the songs except track three in this collection, this one is gender-neutral. The song is about love at first sight. Doug sent me a jazzy instrumental cut that sounded like two guitarists (Doug and Liz Alness) playing at least three stringed instruments. Listen closely to the cut and you’ll see what I mean – the only thing added instrumentally was percussion. He asked me if I wanted to write some lyrics, and I said “Oh, Yeah!” A story idea came to me after a couple of listens, but then I had to figure out how my lyric and melody fit with what had already been recorded. We recorded the lead vocal, added backup vocals by Paul Folwell, mixed it, listened, smiled and walked away. This was our first effort working together. What you hear is that first effort, and we’re happy with it!
When You’re Not Here
A song about a long distance relationship and time apart. As is typical, Doug is the starting point for this and every other song in the collection. I trust him with the music and he returns the favor by giving me control over the lyrics. I kept his hook, added a bridge, changed some lyrics, slightly tweaked the melody to fit and recorded the vocals. Doug mixed in background strings and a fine bass line (by Jason Kapel).

Build Your Own Damn House
Some months back (in 2014), Doug emailed me a link to a story about a woman in California who started a trend with a small shop she named Trouble Coffee. While I was reading it, he was writing a song about it, which he later sent to me. At the suggestions of some trusted members of the songwriting craft, I re-wrote the lyric and added a bridge whilst Doug refined the arrangement, which included another bass track by Jason and (after several experiments with more than a few instruments) Doug on accordion. This tune is dedicated to that courageous woman who got the whole ball rolling, and we thank her for it!

I Can’t Wait
Yes, another love song, this one sweet and gentle with a very nice violin contribution (by Tom Schaefer). The only ballad in the collection, it celebrates the connection that sometimes happens when two lovers are in close proximity, regardless of the length of their time together. ‘Nuff said. Enjoy…
Time To Hit The Road
Our second stab at songwriting, this one had the gestation period of an Asian elephant. After some perceived success with the first couple of drafts, it cooked and boiled and steamed for months until we could say “Voila!” with certainty. Good things take time. The subject of the tune is NOT good (right, a “breakup” song), but at least it can be sung by either male or female performers. Thanks to our Nashville-based songwriting friend Sally Jill Barris for listening and making some valuable suggestions here and on track three!